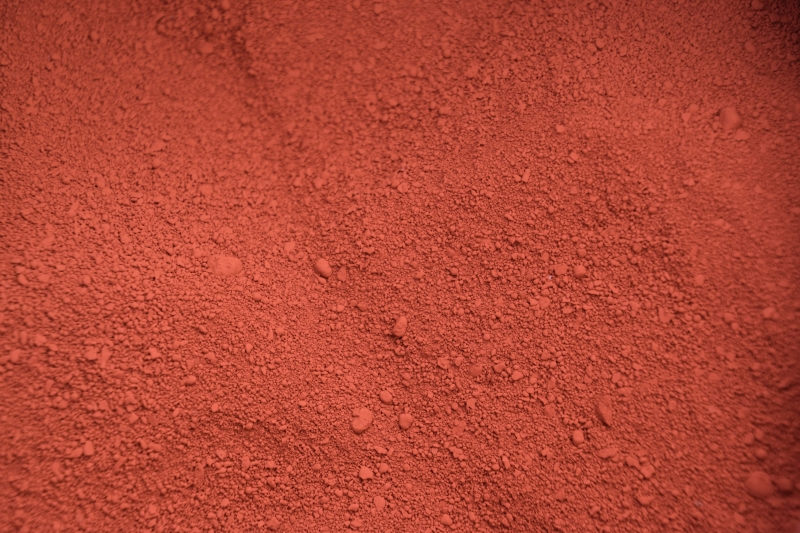 A bit of history.

Glor-Isol is the brand with more than 90 years of experience in the development, production and application of traditional Swedish sludge paint. We are certainly not the biggest, but our sludge paint has outperformed all competitors in independent comparative tests.

Glor-Isol originates from the 1930s when paintshop owner Thord Schunnesson from Stehag, Sweden, was not satisfied with the quality of the common brands of sludge paint used in Sweden to paint houses for centuries: Protection, color fastness and shelf life (of unused paint) had to be improved. Based on his own knowledge and experience, using pigment from the Falun quarries Thord developed his "Glor-Isol Dry Sludge Paint" (or "Glor-Isol Torrslamfärg" in Swedish).

The choice to manufacture a dry paint (in powder form) was equally brilliant as groundbreaking. Sustainability was suddenly no longer a limitation. The ambitious Thord must have immediately realized that the "omission" of solvents and binders meant huge savings in storage and transport.

The unique Glor-Isol recipe, which is still used today for the production of "Glor-Isol Dry sludge paint", also appeared to provide a tremendously greater durability and protection of the treated wood. This did not remain unnoticed.

At various test paint jobs in Skåne until 1940, the superior protective properties of Glor-Isol Dry sludge paint were proven. From that moment, the production of Glor-Isol increased steadily. While the product was originally only known in Skåne, it quickly gained popularity in the rest of Sweden.

Due to the easy availability of bags in the "Landmännen" chain of shops, many Swedish farmers have protected their house and barns with Glor-Isol. But the real success of Glor-Isol came when the Swedish state railways chose Glor-isol as the product with which all red wood equipment and buildings (freight wagons, fences, stand-up sites and stations) were painted. During the same period, the Swedish army and the Swedish road administration also chose Glor-Isol Dry sludge paint for maintenance of their red wood equipment and buildings.

Glor-isol was a great success and became a household name throughout Scandinavia from the 1940s to the 1960s. With 30 to 50 tonnes of dry sludge paint per year Norway was the largest export market, but Glor-Isol also found its way to Canada, Finland and Russia.

Until the late 1960s, the pigment in Glor-Isol came from the Falun quarries. The owner of these quarries (which also owns another brand of sludge paint) then decided to no longer supply their pigment to Glor-Isol. This put an end to the large-scale production of Glor-Isol. In the years that followed, Thord Schunnesson managed to base his recipe on another, inorganic iron oxide pigment. Which turned out to be even better. Not only did this new pigment prove to be much better in color fastness than previously, it also contains no harmful substances such as lead, copper and cadmium. During the 1970s, Thord Schunnesson sold his Glor-Isol dry sludge paint only locally, in Skåne, until personal reasons forced him to cease production and sales altogether. 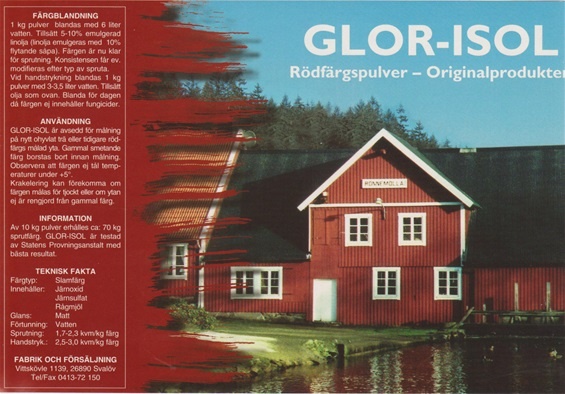 If painter Nisse Westerström had not accidentally come into contact with Thord Schunnesson in 1980, this would probably be the end of Glor-Isol. As an experienced painter, Nisse immediately understood that the recipe from Thord was special and in 1981 he took over the recipe and production Glor-Isol Dry sludge paint.

After the acquisition, Nisse Westerström mainly used the product in his own painting company. Many "villages" in Skåne were provided with a protective layer of Glor-Isol sludge paint for several years. Already in 1983 the quality was determined objectively by a test by the Swedish national testing authority. The fact that Nisse often only had to come back after more than twenty years for a new painting job may have limited the growth of his painting business, but his clients were extremely satisfied.

When Glor-Isol also came out as the best "red sludge paint" / "rödfärg" in the 2012 version of the periodic test by insurer "Folksam", Glor-Isol Dry sludge paint found its way back to private individuals in significant quantities (who could order via the website www.glorisol.se). 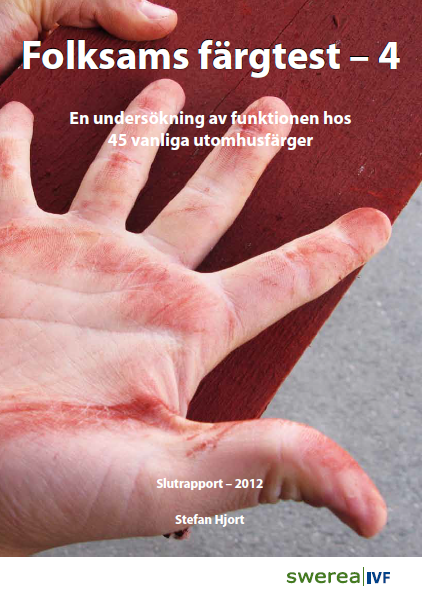 By the end of 2018, due to his age, Nisse decided to pass the recipe of Glor-Isol Dry sludge paint as it was developed by Thord Schunnesson on to a successor.

In early 2018, after buying a few buckets of Glor-Isol Dry sludge paint for their "holiday home" and convinced by the quality and opportunities of the beautiful Glor-Isol product, Dutch Colette Vuulink and Joost van der Linde took over Glor-Isol production and sales from Nisse in 2019.

We look forward to getting in touch, for advice and sales of these fantastic products.

You can find out more about which cookies we use or switch them off in settings.

This website uses cookies so that we can provide you with the best user experience possible. Cookie information is stored in your browser and performs functions such as recognising you when you return to our website and helping our team to understand which sections of the website you find most interesting and useful.

Strictly Necessary Cookie should be enabled at all times so that we can save your preferences for cookie settings.

If you disable this cookie, we will not be able to save your preferences. This means that every time you visit this website you will need to enable or disable cookies again.